The Vikings beat the Cardinals on Sunday, improving to 3-2-1 on the season. The running game was good, Thielen was good and the defense was good. Put it all together, and here’s how we got there:

Synopsis: After the Vikings turned the ball over on downs, the Cardinals quicky got down the field. The red zone defense kept the Cardinals out of the end zone, though, when a blitzing Anthony Barr leapt up and batted down Josh Rosen’s third down pass.

Because of This Play:  With the Bills game leaving a bad taste in their mouth, the last thing the Vikings needed was to go down 7-0 and have doubt creep into their mind against an inferior opponent. Barr made a great play (and had a great game all-around) for the defense to stand their ground and gain some momentum by holding Arizona to a field goal.

Result of Drive: Turnover on Downs

Synopsis:  After Kirk Cousins’ interception set the Cardinals up in great field position, Rosen completed another long pass to get Arizona inside the Vikings’ 10. On the next play, David Johnson took a hand-off to the right side and Trae Waynes went through his 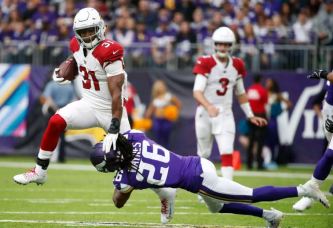 blocker to trip up Johnson for only one yard.

Because of This Play:  The first of four great plays by the defense. This marked the Cardinals second red zone trip, and they only had three points to show for it. This was also one of many impact plays by Trae Waynes on Sunday. If Waynes was blocked, Johnson had a fairly clear path into the endzone. Waynes took out his blocker, tripped up Johnson and set the stage for the Vikes’ goal line stand to keep the score at 10-3.

Synopsis:  With the score tied, the Vikings had the ball prior to the end of the half. Cousins dropped back and hit his safety blanket, Kyle Rudolph, over the middle to convert on a crucial third down. Rudolph wasn’t done there, as he took it for seventeen yards into Arizona territory.

Because of This Play:  The Vikes went down and took the lead. Without this conversion, they go into the half tied, and potentially even losing depending on what happens after the punt. Cousins followed up with a seventeen-yard completion to Adam Thielen, and Dan Bailey kicked a field goal to go up 13-10. In his postgame presser, Cousins mentioned the importance of ‘double-dipping’ (when you score before the half, and receive the second half kickoff). This was the first dip to allow the Vikes to go up by two scores.

Synopsis: On the first drive of the second half, the Vikings faced a third-and-long. Cousins threw one down the left sideline to Thielen, who made a signature diving catch to convert and keep the drive alive.

Because of This Play: In the first half, the Vikes left the Cardinals in this game for far too long, as this was their first chance to give themselves a cushion. As I said, the Vikings

were trying to double dip, and this is the reason they did. Thielen made an unbelievable grab (routine, for him) to preserve the drive. A few plays later, he found the end zone to go up by 10.

Synopsis: After the Vikings went up 10, the Cardinals needed to answer, or else the game was going to slip away. On third down, Harrison Smith walked right through the line to sack Rosen and force the Cardinals to go three-and-out.

Because of This Play:  This play didn’t end the Cards’ chances, but it may as well have. If the Cardinals failed to respond immediately, the Vikings were going to cruise, and that’s what they did. They got the ball back and scored three plays later to go up by seventeen. After that, there was no real threat for the remainder of the game. It was a great three-and-out by the defense to maintain the momentum and escape Sunday with a win.

One thought on “5 Plays: Why the Vikings Beat the Cardinals”