The Vikings improved to 2-2-1 with a bounce back/revenge game win, beating the Eagles by a score of 23-21. Everyone could feel this was a big game to define the 2018 Vikings, and they answered to get their season back on track. What did we take away from this one?

That’s the Defense We Know

The defense answered the critics by shutting down the Eagles’ offense. Opportune sacks and turnovers highlighted the day, and most notable of all was Linval Joseph’s touchdown. In addition to Joseph, Xavier Rhodes looked like himself and Danielle Hunter was constantly in the backfield. Another shout-out goes to Stephen Weatherly (more on him in a bit) who filled in admirably for Everson Griffen against one of the NFL’s best right tackles, Lane Johnson. The defense came out strong, holding the Eagles to three points in the

first half. Carson Wentz struggled to drive the ball down the field, and when he did, it resulted in field goals. The touchdown at the end of the game essentially didn’t matter as the game was going to come down to the onside kick, regardless. The defense that was burned in Philly nine months ago showed up and stood tall to re-ignite the season.

With Everson Griffen out for an extended period of time, much of the pass rush seemed like it was going to fall into Danielle Hunter’s hands. Enter former seventh-round pick Stephen Weatherly, who made the impact play of the game, forcing a fumble that Linval Joseph took to the house to put the Vikings up 10-3. This play atoned for the missed field goals by Dan Bailey and gave the Vikings control of the game. If Weatherly can continue to improve, he will help to offset the monumental loss of Griffen.

What Did the Redskins See?

Fans of the Redskins and ownership never committed to Kirk Cousins as a franchise quarterback, and now they’re all starting to look silly. Through five games, I have seen him make some incredible throws, none of which I am used to seeing by a Vikings signal caller. He has faced pressure constantly and continues to show poise, making his connections with both Diggs and Thielen seem effortless. He will have his ups and downs (the Bills game), but so far, there is nothing but positive things to say about his performance. He has done this without a running game and with the pressure of a porous defense (until this game). He has been worth every penny.

I’ve long been an Adam Thielen fan, but I’ll admit not big enough, as I constantly say that Stefon Diggs is more talented. In reality, they’re probably equals and both top-10 receivers in the NFL- and Thielen had the slight edge.  Thielen can run any 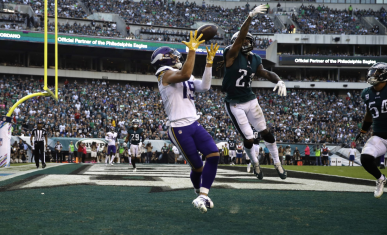 route, make any catch and beat any corner. He has been terrific this season and Cousins’ success doesn’t come without the threat of Thielen, who set an NFL record by going over 100-receiving yards in each of the Vikings’ first five games of the season.  He is nothing short of fantastic.

Can we just trade a first-rounder for Justin Tucker, already? The Vikings kicking woes are long documented and when Dan Bailey proceeded to go 1/3 in the first half on field goals, it seemed like we still don’t have the answer. Luckily, he nailed a clutch 52-yarder to restore hope and seal the game for the Vikings. Often, you only go as far as your kicker can takes you, and unfortunately, never will I ever feel confident that a kick is going to go through the uprights. Never.

This is the last piece of the puzzle. Without Dalvin Cook and with offensive line inefficiencies, the Vikings have barely been able to run the ball. Hopefully Cook’s return can jumpstart it, but for now we’ll have to continue relying on Cousins.

What Did This Game Mean

Everything. This game did two things. The first was restore hope in the defense. Like I said last week, the issue wasn’t even that the Vikings were losing, it was HOW they were losing. The defense finally showed up and, in the process, should restore the identity of the team. If the defense can build on this performance and the offense can continue its success, there’s no reason this team shouldn’t be considered amongst the NFL’s best.

The second thing it did was erase the loss to the Bills. I believe that loss helped the Vikings play with additional urgency, as a 1-3-1 start would have been nearly impossible to overcome. Had the Vikings beat the Bills, lost to the Rams, and lost to the Eagles, they would be 2-2-1 and have two very legitimate losses, and we’d be without panic. They made up for it, and no longer can you point at the Bills game as a spot to win, because this one would not have happened without that failure.

Arizona at home. After the Buffalo game we can’t look far ahead, and I’d be surprised to see them lay another egg at home (though I’ve said that before). Chandler Jones can wreck a game, and with the Vikings being without Reilly Reiff on the left side, he might be able to do just that. Regardless, they should win handily at home, so let’s ominously get ahead of ourselves, riding the next four weeks into the bye week. The Vikings host the Cardinals, visit the Jets, host the Saints and host the Lions. There is no reason they should lose more than one of those games, with the sole challenger being the Saints in a revenge game of their own (although the Lions are always pesky, too). AT MINIMUM, this team should be 5-3-1 going into the bye before an all important?? game in Chicago. They will probably be favored in each of their next four, and with three home games, they need to defend their turf. Time will tell, but it’s time for them to ride the momentum of this win and turn into the Super Bowl Contender they are supposed to be.