The Vikings fell to 6-6-1 on the season after they lost to the Seahawks on Monday night. Last week, I broke down what was wrong through the first twelve games with the following headings. Let’s go through the list and see how we did…

John DeFilippo Is Not Who We Thought He Was 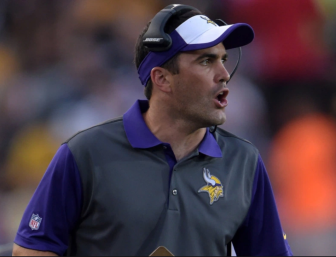 Enter Kevin Stefanski. Stefanski is in the final year of his contract, and Zimmer decided it was time to see what he had in the Vikings longtime assistant. Stefanski has been with the Vikings franchise since 2006, coaching tight-ends, running backs and quarterbacks in the past twelve years. At 36 years old, Stefanski has a chance to be the Vikings offensive coordinator for the next couple of years. Best case scenario, the Vikings catch lightning in a bottle and go on a run in the 2018 playoffs, confirming their offensive coordinator for years to come. Worst case, they have a sample size to evaluate Stefanski for next season.

*Looking way ahead – 2019 offensive coordinator name to watch, Jay Gruden. If Gruden is fired as Washington’s head coach, he has history with Zimmer in Cincinnati and Cousins in Washington*

0-for-2. Kurt showed up. Cousins was frantic, especially in the first half. He felt pressure before it was there and was skittish on a number of throws, none more apparent than when he darted a throw to Latavius Murray five yards behind the line of scrimmage when the pocket was collapsing. Had Murray not made a fairly difficult catch, disaster would have ensued. It was a decision that an NFL quarterback should never make. Additionally, Cousins failed to consistently move the chains and was seemingly unable to go through progressions, being sacked or throwing the ball away if his first option was covered.

Kirk has faltered in prime time, going 1-3 against top competition, which has put him further under the microscope. Hopefully a return to afternoon games, a return home and a new play caller brings Kirk back on the field to take this team into the postseason.

0-for-3. Impressive. The Vikings failed to convert on the following plays:

If you can’t convert and extend drives on third-and-short, you won’t win a close game. DeFilippo is out and the third-down ineptitude is likely why. Let’s hope this is a problem Stefanski can solve.

1-for-4. We did it! Beautifully done. At least the ball wasn’t turned over (until the game was at least out of reach). As a result, the Vikings were still in the game and had multiple chances to take the lead. Sometimes, it’s that simple.

1-for-5. Great teams turn a deficits into leads. The Vikings had two main opportunities to take the lead. They failed to convert on first-and-goal from the five. On the next drive, they failed to do anything with their favorable field position.

The Defense Finding Its Footing

1-for-6. At least this is a good thing to continue doing, as the defense played outstanding on Monday night. With that said, the unfortunate trend continues that they are somehow losing while stifling the NFL’s top quarterbacks. Last week I wrote:

“What drives me crazy is how well they’ve played without winning results. The Vikings have played four games against the NFL’s top-3 quarterbacks (Aaron Rodgers, Drew Brees and Tom Brady). Combined, those quarterbacks are: 89/125 for 910 yards, 4 TDs and 2 Interceptions, an average of a 71.2% Completion Rate, 227 yards, 1 TD 0.5 INTs. Pretty damn good for the defense, except, the Vikings are 1-2-1 in those games.”

Let’s add Russell Wilson’s putrid stat-line to the mix and the averages get even worse:

Side note: If the Vikings won last night, would Russell Wilson get the criticism Kirk received today? Probably not, but he was arguably worse.

At The End of the Day…

It’s all still somehow in the Vikings control. If they go 3-0, they are in. If they go 2-1, they will need some help, as the Eagles and Panthers will need to each lose at least one game. If they go 1-2, they’re deservedly toast.

Let’s break it down:

Vikings – vs Miami ; at Detroit ; vs Chicago

Eagles – at LA Rams ; vs Houston ; at Washington

Panthers – vs Saints ; vs Falcons ; at Saints

Realistically, a playoff team of the Vikings caliber (a caliber that they are not fulfilling) should easily go 3-0. They need to defend their home turf vs a mediocre Miami team, win a road game against a defeated Detroit team and take care of a Chicago team who may have nothing to play for come Week 17.

The Eagles and Panthers have far more difficult roads, as each has to go on the road against an 11-2 team. An Eagles or Panthers team that can run the table against fairly troubling schedules deserve the playoffs.

For the Vikings, the hope isn’t if they can make the playoffs, it’s to have hope they can do something once they get there. While they will have lackluster competition, signs of life over the next three weeks would at least be nice. The defense sure looks ready. It’s time for the offense to catch up.