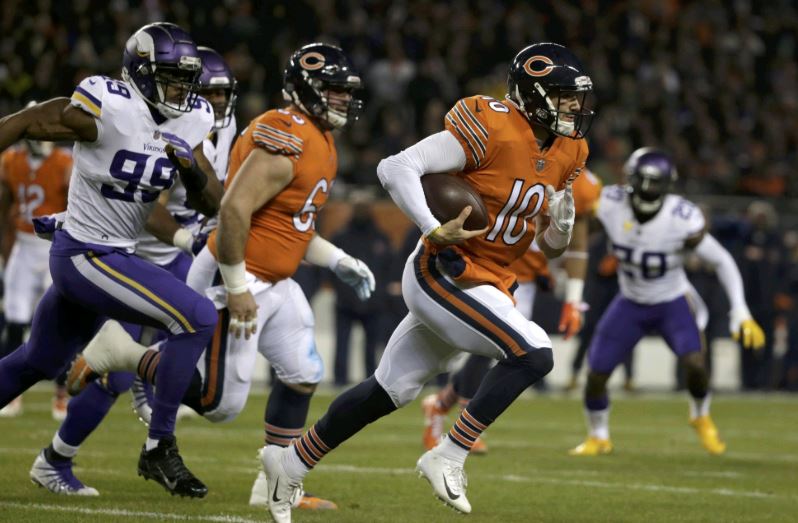 The Vikings dropped to 5-4-1 in a loss to the Bears on Sunday night. In a game packed with turnovers, it was a matter of who could take advantage of field position and points on the board. The Vikings failed to do so, falling behind early and never recovering. Here’s what led to their loss:

Synopsis: On the first drive of the game, the Vikings were staring down a 2nd and short. Cook appeared to move the chains on second down but came up just shy. The Vikings followed with a run up the middle with Murray, who got stuffed, forcing the Vikings to go 3-and-out on their first drive.

Because of This Play: For the Vikings, it was important to get out to an early lead so that they could put some additional pressure on Mitch Trubisky. The Vikings set themselves up to get a drive going when their first play gained eight yards. After that, John DeFilippo dialed up two conservative, predictable runs and the Vikings were forced to punt.

Synopsis: On the Bears first drive, they were immediately staring down a 3rd and 7. The Vikings pass rush got to Trubisky in the backfield, but he was able to avoid Danielle Hunter just enough and scramble for a first down.

Because of This Play: Instead of going three-and-out, the drive continued, and the Bears worked their way into Vikings territory for a field goal. It was a sign of things to come, as Trubisky did this throughout the game, including a couple of runs on the Bears first TD drive to extend the lead for Chicago.

Synopsis: After the Bears took the lead, the Vikings quickly found themselves on the Bears’ side of the field. Stefon Diggs dusted Kyle Fuller on a double move and was open in the back of the end zone, only for Cousins to overthrow him by a few yards.

Because of This Play: I can’t stress the importance of an early lead against a team like the Bears on the road. It allows your team to continue their game plan and keep the entire playbook open while putting pressure on the other team. This was a sure seven points that Cousins missed. These are the kinds of throws he’s getting paid to make and it proved costly once the drive ended on a Cook fumble and the Vikings came up empty handed. These missed opportunities put the Vikings in hole they proved incapable of digging themselves out.

Synopsis: After the Tarik Cohen fumble, the Vikings had the ball deep in Bears territory. On 3rd and 2, Cousins was sacked by Akiem Hicks forcing the Vikings to settle for three points.

Because of This Play: Fast forward all the way to the fourth quarter. The Vikings generated their share of turnovers in this game, but the offense’s inability to turn great field position into touchdowns proved costly down the stretch. On this 3rd and short, the Vikings were unable to move the sticks and the Bears defensive line continued to make life miserable for Cousins and the Vikings.

Synopsis: Somehow within striking distance, the Vikings had a chance to give the ball back to the offense with just under four minutes left. Trubisky dropped back and found an open Allen Robinson in for an easy completion to stay on the field.

Because of This Play: The Bears were ultimately able to extend the lead to two scores.  The Vikings top-rated third down defense was unable to come through on several occasions in this one and none was more vital than this one in the fourth quarter. A comeback felt unlikely, but a stop here could have conserved their timeouts down the stretch and potentially given the Vikings the ball back after their failed onside kick.