We are a little bit more than halfway through the Vikings season, and we still have more questions than answers. Currently, the Vikings sit at 5-3-1, which is good for 2nd place in the NFC North behind the Chicago Bears. Before the season, I went through the schedule and predicted the team to finish at 11-5. Eight games through the season, here’s what I wrote:

“At the halfway point, a 6-2 record would be huge for this team, proving they could beat playoff contenders. If they slip up in a game and are at 5-3, they’re still in okay shape, but will need to do damage in the division. 4-4 would be a major concern. Record: 5-3.”

Through nine games, the team is 5-3-1. They’re basically on track with two of the biggest games of the season staring them in the face.  Nobody has run away with the division, and it’s theirs for the taking. Here are the first half storylines and what to expect in the second half.

The Vikings $84 million dollar man has gotten a fair amount of criticism lately. Where I start with Cousins is that fact that he can throw the ball better than any Vikings quarterback I have ever watched (maybe outside of 2009 Brett Favre). His ball placement and decision making have been well above-average, and he has kept us in  games while displaying the capability to comeback if necessary. So far I am extremely pleased and excited that he is our quarterback of the future.

With that said, two things worry me about Cousins: his fumbles and his batted passes. He lacks pocket awareness when getting sacked from his blindside, coughing up the ball on numerous occasions. His 17:5 touchdown-to-interception ratio doesn’t tell the whole story, as most of his turnovers come from fumbles. It’s vital to protect the ball with the elite Vikings defense and its an area Cousins has to improve. He still hasn’t grasped that he can live to fight another day. Also, in recent weeks Cousins has had passes batted down by the opposing defense. Cousins has a tendency of patting the ball before he throws it, allowing the defense to key in on when he will release the ball, giving them time to put their hands up. None of these passes have resulted in interceptions, but it’s only a matter of time if it isn’t fixed. If Cousins can shore up these issues, the Vikings will continue to roll, and in the grand scheme of things, I am happy to have Kirk.

The running game started slow and has since improved. The Vikings offensive line seems to have a groove going (though the pass-blocking is leaving a lot to be desired) and while Latavius Murray provided a much-needed spark in the past few games, Dalvin Cook showed another dimension against the Lions. If Cook returns to full form after the bye, this offense will flirt with top-5 status. Cook can be the difference maker in games, and if he has fresh legs after sitting out six games, it will take a lot of pressure off of Cousins and the defense.

Adam Thielen’s first-half has been nothing short of outstanding. Prior to his lackluster game against the Lions, he led the NFL in both yards and receptions (he’s tied for first in receptions alongside Michael Thomas and third in yards behind Thomas and Julio Jones). Unfortunately, fresh in our minds is the fumble against the Saints, but that blunder aside, he has been unstoppable. He’s open when he’s not, and he has a legitimate case to be considered the best wide receiver in the league. 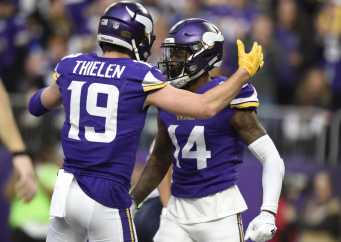 Complimenting him is Stefon Diggs, who is having a great season of his own. Diggs is tied for ninth in receptions, and is also top-25 in receiving yards. All the Vikings lack is a third option. Dalvin Cook’s return could provide an additional passing outlet, but luckily Diggs and Thielen seem capable of shouldering the full load of the passing game as the best receiving duo in the league.

The first four weeks of the season were a cry for help. In the Zimmer-era, never have I seen the defense play so poorly. Since then, though, the defense has looked like the dominant unit we’re accustomed to seeing. With stars littered on all-three levels it is beginning to look like the unit it was in 2017.

Special shoutouts to Danielle Hunter, who is second in the league in sacks with 11.5, and Trae Waynes, who has looked much improved this year. If the defense can continue its upward trajectory, the Vikings will make a case for the best defense in the NFC. While the recency bias of the first four weeks has prevented the media from discussing its dominance, I have re-gained full confidence in this unit going forward.

After the current divisional stretch, here’s what I had written before the season:

“This should be another 3-0 sweep at first glance, but winning three straight divisional games is no easy feat. The Lions should always be a win at home(Check). However, the Vikings always have trouble at Soldier Field. Khalil Mack won’t help matters, but they should still get the best of Mitchell Trubisky and the Bears. The Packers will be another battle, but you need to win your home games. We’ll give them a loss somewhere in here and still be in okay shape. Record: 7-4″

If you read anything above, it’s clear I am optimistic about the 2018 Vikings (why? I don’t know). This team can beat anybody in the league. They are 5-3-1, and aside from the Bills game which we will no longer speak of, their losses are to the Saints and Rams, who are a combined 17-2.  In Week 4 in Los Angeles, the Vikings defense was going through its early season slump and still had a chance to tie the game on the last drive. Against the Saints, if Adam Thielen doesn’t fumble, I think the Vikings cruise and this is an entirely different article. This team belongs.

The Vikings remaining 7 are as follows: at Bears ; vs Packers ; at Patriots ; at Seahawks ; at Lions ; vs  Dolphins ; vs Bears.

The next four games are a gauntlet, and the next two divisional games might make the season. If the Vikings go 2-0, I’d be ready to hand them the keys to the division. Even at 1-1, they will be okay, as I believe all they have to do is go 2-2 over the next four, setting themselves up at 7-5-1 with three games they should win to end the season. Unfortunately, this is a month in the making and we have to be patient to see how it all plays out.

Overall, with the flashes shown by the team in recent weeks, I find myself an optimist. I predict the team to go 10-5-1 and win the division, though it wouldn’t surprise me for 9-6-1 to be enough. The Vikings are still one of the best teams in the NFC and anybody who has watched each game can see that they have the talent. It’s just a matter of putting it all together.