This is the reason I created this website. For games like this. For the inexplicable outcomes. The Vikings lost to the Bills on Sunday AT HOME. They botched a chance to bolster their record, putting themselves in a tough position with two difficult road games upcoming. Vikings fans have seen a lot, and I should know better than to be surprised at this point, but this shocked me. Coming off a promising tie in Lambeau, the Vikings looked the part of their sky-high expectations. Great teams are supposed to beat bad teams, but they were outworked and outplayed for the entirety of the game. Let’s figure out what happened and try to make sense of it all.

Everybody thought there was no use in playing this game. Don’t show up, let the Vikings leave 2-0-1 and call it a day. Instead, they got it absolutely handed to them. Like I said, I was shocked.

Before the season, when breaking down the schedule, I wrote:

“With that said, Super Bowl Contenders need to show they belong, and they should be at least 3-2 after this [Week 5 at Philadelphia] and steal one of the road games, which would put them in great shape. 2-3 would not be the end of the world, but 1-4 would cause for great panic. They won’t lose to the Bills so I won’t entertain 0-5.” 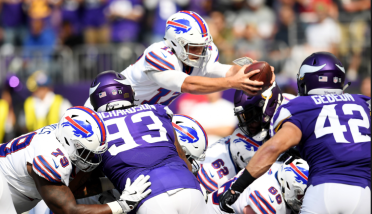 “If they lose, they don’t deserve anything this season. The only way this happens is looking ahead to game plan for the Rams, due to the short week. Teams admit they don’t do this, but they should, since I feel like I could be quarterback on Sunday and beat the Bills (my arm is okay, but knowledge of the Vikings offense is minimal).”

I should know better than to take anything for granted, but come on. Let’s hope they were looking ahead and that they are better prepared for the Rams than they were on Sunday. I think there’s a human element of getting up for a game, and not a single player on the Vikings did so. This is something that should never have happened. I cannot make the least bit of sense of the outcome.

Outside of Kyle Rudolph, who claimed a lot of people were underestimating the Bills, Zimmer and the Vikings sounded genuine in their respect for Buffalo. I didn’t expect them to admit they were peaking ahead, but I think they expected to walk all over the Bills. They basically told us that when they ruled Dalvin Cook and Everson Griffen out fairly early in the week. Even though everyone says, “we take one game at a time”, the human element of seeing a seemingly futile opponent got the best of them. The phrase “Any Given Sunday” is cliché but it’s true. NFL players are talented and when you go out and play without an edge, you will be beaten. Badly. Right now, they don’t deserve anything, but it’s a long season.

No finger pointing in this one. This was a rare game where all three phases played abysmal football. Kirk Cousins was distraught. Riley Reiff was a turnstile at left tackle. Anthony Barr was a walking penalty (and when he wasn’t he was getting hurdled by Josh Allen). Bills receivers were left uncovered. Chris Ivory was getting 55-yard gains. Mike Hughes was botching punts. There was not a single play that gave me any form of promise. (Even though Dan Bailey didn’t miss a kick) All a fan can do is hope that it’s a fluke and that this talented group can put it behind them in time for a marquee matchup in Los Angeles this Thursday.

The NFL is Weird

In 2016, the Vikings started 5-0 and went on to go 8-8. In 2017, Case Keenum played awful against the Steelers in Week 2, but then proceed to lead the team to a 13-3 record and to the NFC Championship game. The reality is this is one week, but it was an extremely confusing outcome that is creating panic. Early in the season, it’s hard to predict which teams will be good.  The continuity of the Vikings should return this team back to who  they are.

The good news is we have company. The Patriots just lost two straight games. The Steelers are still winless. Somehow, the Dolphins and the Buccaneers are undefeated. Aside from the Chiefs and Rams, I’m not confident in a single team to win a game, and even so I think Patrick Mahomes will come back to Earth. You must remember that it’s a long season, a weird NFL, and the first three weeks don’t define you.

The Rest of the Division

Let’s take a pulse on the division and how it’s shaping up, though as we saw today, everything can change in one week. It’s the same order as the beginning of the season. Packers. Bears. Lions. The Packers are the Packers. They dropped a game this week, but Green Bay will pose a threat as long as Aaron Rodgers is on the field. They host one of the NFL’s best teams in the Buffalo Bills this week. Go Bills.

The Bears are not yet a major concern because I think Mitch Trubisky will hold them back. However, Vikings teams of the past have won divisions with Christian Ponder and a great defense. Khalil Mack is a legitimate game changer who probably adds two wins to the Bears record this year. I’ll put the Lions last, but the games against them will be hard fought. The NFC North is very much up for grabs.

Selfish Thought of the Day

Jimmy Garoppolo and what appears to be a torn ACL, ending his season. Do I feel bad for Jimmy G? Yes, it stinks to see a team’s season go up in flames. But what really stinks for the Vikings is that the NFC North plays the NFC West this year, which means the rest of our division will play the 49ers. The Vikings already earned their victory over Jimmy G and company at the beginning of the season, but now, the Packers, Bears and Lions all have the pleasure of facing CJ Beathard, making a tough game an easy one.

I think the next two games is the reason I feel panicked. This team can easily be 1-3-1 once Week 5 is over. Prior to getting stomped by Buffalo, the Vikings were looking at a 2-0-1 record heading into Los Angeles and Philadelphia. Even a 2-2-1 record would put

them in okay shape, heading into the Cardinals and Jets. They clean up those games, and at 4-2-1, they’re feeling good for the rest of the year.

With that said, they need to take one of these games against stiff NFC competition. Great teams find ways to win tough games. Unfortunately, as biased I am, I can’t be confident that Thursday will be the game. The Rams are playing arguably the best football in the NFL right now. The Vikings are definitely capable of winning this game, so there is some hope that an entirely different team shows up on Thursday night.

Currently, both Rams cornerbacks (Aqib Talb and Marcus Peters) are fighting through ankle injuries. The Vikings will look to get Dalvin Cook back, but will probably be without Everson Griffen and Trae Waynes. I think it will be close, but the Vikings just lost to the Bills who had a player retire at halftime last week.  Until further notice, they don’t deserve anything this year.